Searching online I've found limited information on the procedure, although one person did post some decent pics of what he did. None of the cameras were the exact models we have, but appeared to have a similar internal battery. I'm interested in finding out more if anyone on here has done this. Anyone?

The cameras we have that won't keep the time/date:

I opened up a Blackout and the 57 HD, and both had identical internal battery placement/configurations. These are soldered to the board.

My plan is to remove the old CR927 lithium cell with a solder gun and then replace it by soldering 22 G solid core hook up wire and making a pigtail to a new CR927 cell. Plan to attach the 22 G wire to the new battery with heat shrink.

One issue with these cams is the location of this battery. It's sandwiched between two boards and when I remove the screws to separate the boards I can only gain so much clearance due to two attached ribbons and attached wires. I see no easy way to remove the ribbons or wires. Again, anybody on here completed this procedure? If so, any tips?

Here's a few pics of the battery. In the last picture the lithium battery is underneath the board on the right, which is held with 5 screws.

Yes, these are old cams, but I figured I might as well try to fix them since right now they are just paperweights. Would be nice to get them up and running again! Any advice?

By Fl_Cracker -  Wed Jun 05, 2019 9:15 pm
-  Wed Jun 05, 2019 9:15 pm #357482
I recently replaced the internal battery in my Browning BTC-5hd, because it would not keep the time or date. It was a success and now keeps the date/time. The battey is different then the one on yours (see pict). First I checked new battery with meter to see if it was good. Then soldered new battery in place and checked with meter again. The battery will charge up from the cameras AA batteries. The ribbon cable should come out of terminal. I use a small screwdriver set for repairing eyeglasses and push straight back on the black ear of terminal. Work each side (ear) equally a little bit at a time and ribbon should come out easily with no effort. Be careful with soldering iron around ribbon cable (melts quickly). 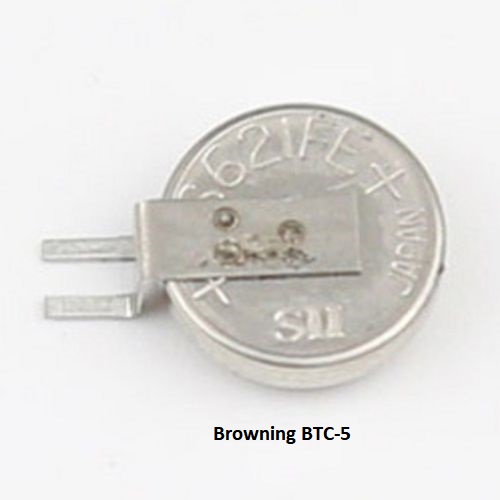 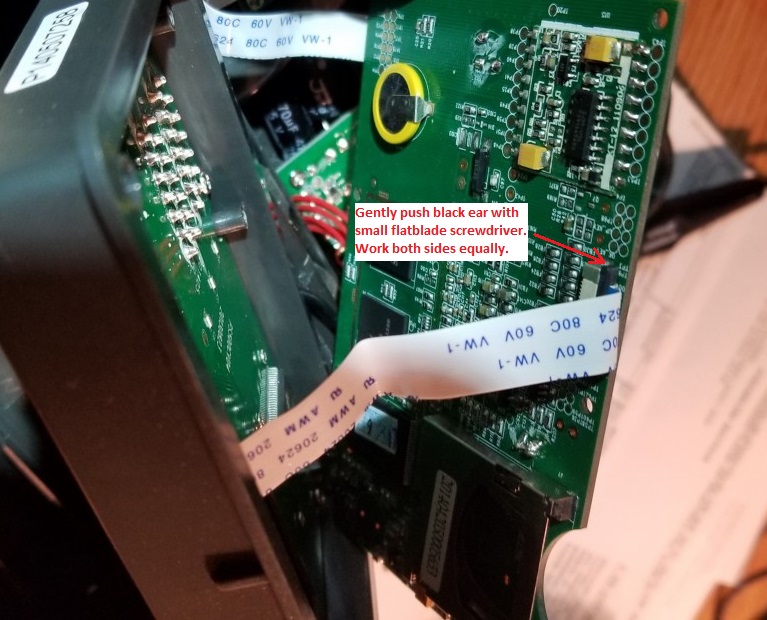 Thanks for the tips. I will try to get the ribbon cable detached and then I'll have easier access to the battery. I appreciate the labeled picture! Very helpful.

I also have an older Browning Recon Force BTC-2 that won't keep the time/date. I'll have to open it up and see if I can fix that as well.

I was wrong, the battery was a CR1220, not a CR927. Anyway, I removed the old battery and then soldered 22 G solid core hook up wire to the terminals, making a pigtail leading to a fresh CR1220. I used heat shrink to pin the other end of the wires against the new lithium cell, and to cover the connections.

So far, this has worked and the camera is working normally with a correct time and date. I'm going to try this on the other Primos Truth cams and see if I can resurrect those as well.

All of the Truth Cams had CR1220 lithium batteries inside. The older Supercharged had a different internal configuration that made it harder to access the battery, but I eventually was able to remove the old battery and solder wires to the leads and run those to a fresh battery.

The Proof 02 in the picture has a damaged fresnel lens (bear attack) that my brother tried repairing (didn't need to replace the internal battery on that one, yet).

Now looking for security boxes for these old cams. I will make some homemade boxes, unless I can find someone with unused boxes lying around that they would like to get rid of

Hi, Our Ridgetec Lookout Dual 4G LTE camera is a […]

A video before rain raised the water level. The s[…]